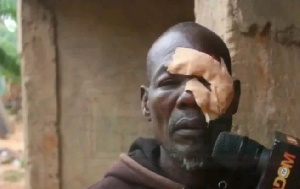 Father of 6 loses eye in fight over dog meat

A Father of 6 based in Nkawkaw in the Eastern Region has lost his sight forever after he was punched in the eye over dog meat.

One David is said to have contracted him to provide some dog meat for his consumption.

Mohammed who knows where the best dog is in Nkawkaw is said to have taken GHC 70 to provide him with quality and tasty dog meat.

However, as prices keep skyrocketing in recent times, Mohammed could not get a gog for GHC 70 and therefore decided not to make the purchase of David’s behalf.

However, Mohammed also failed to return David’s GHC70 cedis; an action that infuriated him to visit the residence of Mohammed to seize his bicycle.

Mohammed went to David’s house to take his bicycle but a fight ensued leading to David punching the eyes of Mohammed. Mohammed was rushed to the hospital and has since lost his left eye.

Tags 6 DOG eye father FIGHT IN LOSES meat OF over