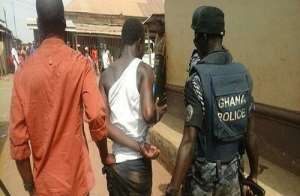 A police officer foiled a robbery attack on the Yokwa gas filling station located at Larteh-junction within the Akropong enclave in the Eastern Region.

Inspector Albert Kuntu Blankson of the Akropong-Akuapem Police Divisional Command, who was on night guard duty in the area, engaged the robbers in a shoot-out around 1 am on Thursday, April 14, 2022.

He managed to shoot one of the robbers, Ernest Antwi, 28, on the upper part of his waist, while two others, whose names were only given as Kwame and Maxwell, managed to escape but with gunshot wounds.

The Eastern Regional Police PRO, DSP Ebenezer Tetteh, who confirmed the incident to Citi News, said: “On the 14th of April, at about 1:20am, one Inspector Blankson was in charge of night patrol at the Yokwa filling station, based on information received that three men who had come from Asante Mampong were attempting to rob the filling station. In the process, he engaged the three armed robbers in a shoot-out. Two of them managed to escape, but one was hit. He has been arrested and is in police custody, assisting the police in investigations.”

He urged hospitals and residents to report persons with gunshot wounds to the police.

In an earlier situation report (SITREP), police in the area said the suspect upon interrogation agreed to furnish the police with the necessary information which will lead to the arrest of his accomplices only if his life is saved.

“He pleaded with police to save his life, and he is prepared to assist police arrest his accomplices. Police combed through the vicinity and saw drops of blood from the yard to the spot suspect Ernest Antwi fell. Further inspection in the guard room of the duty man saw pellet holes on the wall. Two life cartridges were retrieved at the scene. Suspect Ernest Antwi has been taken to the Tetteh Quarshie Memorial Hospital, Mampong-Akuapem and currently receiving treatment under armed guard.”