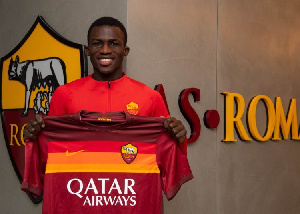 Mother of Berekum-born AS Roma Ghanaian sensation Felix Ohene Gyan, Juliet Adubea, has revealed that she had to stand her grounds to ensure her son sealed a move to the Italian giants.

The Sunyani-born striker has already hit the ground running in Rome after scoring and assisting on his debut in the Juvenile leagues in the Mediterranean country.

A flock of Ghanaian clubs lined up for the signature of the talented forward who has been a schoolboy at Berekum.

Dreams FC, Asante Kotoko and a host of second-tier clubs including Techiman City FC all queued up for the signature of the youngster but all failed in the bid.

Ghanaian super-agent Oliver Arthur eventually managed to convince the parents of the promising striker to allow him to seal the move to Europe.

The mother has revealed that she had to resist huge pressure from certain elements within the Ghana FA to ensure the right decision was made for her son.

“I’m naturally a tough person and I was able to deal with the pressure from people within the football corridors. It got to a point that Dreams had to battle it out with Oliver Arthur and I eventually decided to give him to Oliver,” she said on Nimdee FM.