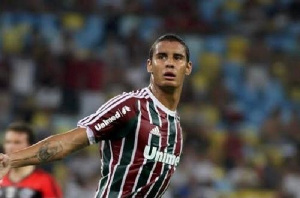 Kumasi Asante Kotoko are back in the spotlight having announced the signing of Michael Vinicius Silva de Morais.

The 27-year-old attacker is the second player from Brazil the porcupine warriors have hired in less than a year.

Having had a prior stint with clubs such as Fluminense (Brazil), Linkoping City and Vasalunds IF (Sweden), Vinicius boasts of a record of 68 appearances out of which he has found the back of the net 19 times.

GhanaWeb chanced on a video of the striker in action that shows his ability and potency to deliver the much-needed lead force Asante Kotoko demands going into the second half of the 2020/2021 Ghana Premier League Season.

Watch Vinicius in action below: