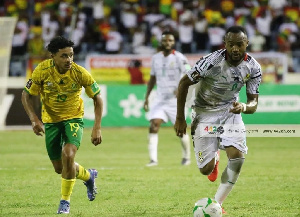 FIFA has explained in a detailed report, their decision to dismiss South Africa’s protest against Ghana.

The defeat, as a result of a controversial penalty, ended South Africa’s hopes of qualifying for the 2022 World Cup in Qatar.

However, FIFA Disciplinary Committee dismissed SAFA’s case and ruled that their case was inadmissible, without providing details and an explanation in early December 2021.

A month after their ruling, FIFA furnished SAFA with detailed explanations as to why their protest against Ghana was thrown out of the window.

FIFA provided the clarity that SAFA failed to meet three procedural requirements in their protest which includes,

(i) no written protest was submitted to the match commissioner, (ii) the Protest was not lodged in a timely manner, and (iii) no protest fee had been paid.

South Africa responded by saying they are weighing their options on whether they still want to pursue their case.

SAFA CEO Tebogo Motlanthe said: “It was a complaint and not a protest and that’s why we took the matter to the DC and not other FIFA channels.

They did not even read the merits of our technical report argument. You cannot protest over a referee’s decision.

It was a complaint against the conduct of the referee and we believe the referee manipulated the outcome of the game. We will look at the situation and let the public know of our final decision,” he added.

Ghana, meanwhile, awaiting the play-offs draw which will be conducted this month.