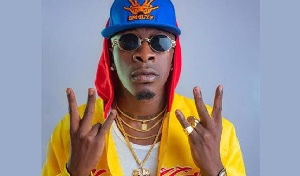 Shatta Wale smiles at the money he made from December shows

Shatta Wale has revealed he made enough money from his December shows in a social media post.

Taking to his Twitter page, Shatta Wale disclosed, he was surprised he made a lot of money from all the shows he performed in December.

“Am (SIC) checking my account for my December shows ….what……Money be this,” he said.

On December 25, Shatta Wale hosted his “Freedom Concert” which had tens of thousands of fans trooping in to fill the stadium and to watch their favourite artiste perform after his release from jail.

The dancehall artiste on that day called Nigerians ‘stupid’ and went on to accuse them of not reciprocating the love they get from Ghanaians which started Shatta Wale and Burna Boy’s brawl on social media.