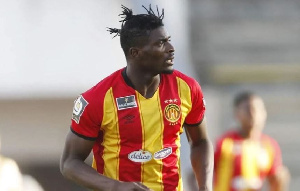 Per the transfer agreement between Dreams FC and Prishtina, the Ghanaian side is entitled to a percentage from the unward transfer of the player from Prishtina after releasing him to the Kosovo side in 2016.

After two years’ stay with Prishtina, Basit was transfered to Teuta Durrës back in 2019 but the Kosovo side have since failed to give Dreams FC their share.

After several attempts to recover the money from Prishtina which have been fruitless, FIFA have finally imposed a transfer ban on them which will bar them from registering new players from the next transfer window.

The ban has no definite date of expiry, meaning Prishtina risk going for several seasons without the chance of registering new players.

The Kosovo side, however, will have their transfer ban lifted if they pay the Ghanaian side their percentage from the tra sfer of the Sheriff Tiraspol striker.

The Still Believe lads have been victims of several unpaid transfer percentages and may head to FIFA to initiate the process of recovering their due payments from other clubs.