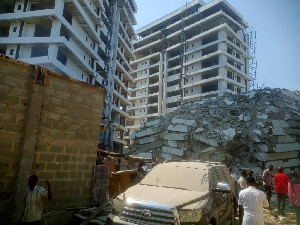 Scores of people are reported to be trapped under the rubble of a 21-storey building that collapsed in Nigeria’s commercial capital, Lagos on Monday, November 1, 2021.

The building which is still under construction is located on Gerard Road in the upscale Ikoyi neighborhood on Lagos Island.
Emergency workers from the Lagos State government arrived at the scene with initial rescues made.

The Nation reports that most of the trapped persons are artisans who were working on the site.

It is unclear if there are any casualties at the time of filing this report.

Lagos Commisioner of Police earlier told me that the rescue operation will continue throughout the night. On cause of the collapse, he said the investigation has started to ascertain the cause. Several dozens are believed to be trapped beneath the debris. https://t.co/xNvLhBNPxypic.twitter.com/gdx3O5BhzF