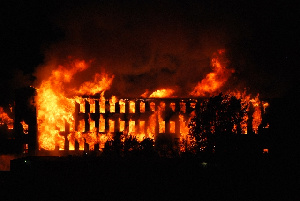 The inferno, which started at about 8pm, destroyed containers and other properties belonging to the traders.

Three large provision stores close to the smoked mudfish market, in the same vicinity with the Zambarima Pwekura, were completely destroyed before firefighters brought it under control.

The fire did not hurt any of the traders, but a young man who helped fight it sustained a deep cut in his right hand.

The cause was yet to be established but the store owners suspect an electrical fault sparked the fire.

The rapid response of the Ghana National Fire Service prevented the fire from spreading to other stores.

The incident has resurrected the conversation on the need for the Kassena-Nankana Municipal Assembly to decongest all markets in the town to make them easily accessible in times of disaster.