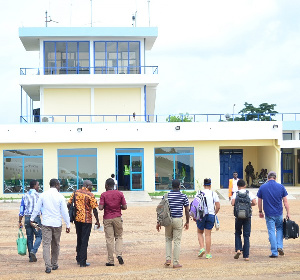 Government is said to have completed the first phase of the Sunyani Airport.

This is according to the President of the Bono Regional House of Chiefs, Osagyefo Oseadeayo Agyeman Badu II who expressed gratitude to the government for the swift completion of the phased project.

Speaking during a courtesy call on the President [Nana Addo Dankwa Akufo-Addo] at the Jubilee House last week, Osagyefo Agyeman Badu II said, “Nananom are rightly informed that Phase 1 is now fully complete and will be fully functional after it is officially commissioned.”

“Mr. President, we thank you for the re-construction works on the Sunyani Airport. Sometime past, we all remember the deplorable state of our airport. It took the shine off our region significantly. That’s is why we are here to thank you”, he added.

Meanwhile, the Transport Minister, Kwaku Ofori Asiamah last year [2021] disclosed that flight operations were expected to resume in October 2021 but the project was impacted by the COVID-19 pandemic.

He explained before parliament that the progress on the first phase of the rehabilitation works for the Sunyani Airport includes; the taxi link; the apron; runway and renovation of the terminal structure.

Since the commencement of commercial operations at the Sunyani Airport, the facility has not witnessed any major renovation works. The airport was originally constructed as an Airstrip and later upgraded into an airport in 1969.

It currently has a total runway length of 1,520 meters made up of 1,400 meters of paved runway and 60 meters of unpaved Runway End Safety Area (RESA) at both ends.