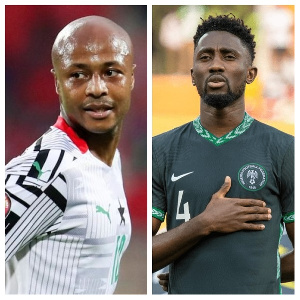 Ghanaians and Nigerians cannot wait long enough for their game on Friday, March 24, 2022 at the Baba Yara Stadium.

An age-long rivalry will be reignited when the two ‘West African cousin’ compete in the first of two matches that will determine which one plays at the 2022 World Cup in Qatar.

Both countries would have loved to have the full compliment of their teams but owing to injuries and suspensions, some key players would have to sit out the two-legged tie.

As we build up to the game, GhanaWeb identifies the five players whose absence will be greatly felt.

The Leicester midfielder is undoubtedly the biggest miss in the tie. The fulcrum of the Nigerian team, Ndidi will miss the game due to injury.

The midfielder picked up an injury in Leicester’s game against Rennes in the Europa League and has reportedly been ruled out for the rest of the season.

His absence will be huge for Nigeria with his opposing midfielder Thomas Partey picking form for Ghana.

Aside being the most-reliable goal-source for Ghana, Andre Ayew is an inspirational figure for the Black Stars.

He is man who loves the big occasion and would not have any problem bagging a goal against Nigeria but Ayew is unavailable for this tie.

The Black Stars captain got a red card at AFCON against Nigeria and will miss the tie.

For all his struggles, Maduka Okoye is still Nigeria’s best goalkeeper and would have kept the post but for a late injury.

The goalie has been ruled out of the first tie after suffering an injury in Nigeria’s camp ahead of the game.

The Sparta Rotterdam goalkeeper has been replaced by Enyimba’s John Noble. His absence paves the way for Francis Uzoho to be Nigeria’s best goalie against Ghana.

At the point when Iwobi is balling for Everton, he would not be able to replicate it for the Super Eagles.

The former Arsenal man is one of few Nigerian players with the ability to dribble and pass through the lines and his absence will prove costly.

His absence is due to a red card he was shown in Nigeria’s game against Tunisia at the 2021 AFCON.

Baba may not be playing at the level he once did but fact remains that he is Ghana’s most reliable choice at left back.

The Reading defender is out of the game due to an injury he got in mid-February in the Championship.

The left backs have been called to replace him but it remains to be seen if any of them can match up to the Chelsea left back.

Previous VGMA 2022: Why Shatta Wale was not nominated
Next Immigration Officer killed by smugglers was shot 6 times; weapon taken – Report