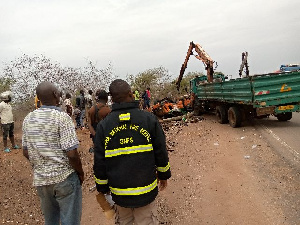 Five electrical engineers working with Budic Engineering Works Limited have been confirmed dead in an accident on the Wulugu-Bolgatanga road in the West Mamprusi Municipality of the North East Region.

The incident happened between the hours of 11 AM and 12Noon on Saturday, April 16, 2022) after a KIA Rhyno carrying electrical poles and ten electrical engineers with a registration number UE-66-20 shoved a Nissan Stanbic Urvan bus with a registration number UE-154-19 in an attempt overtake the Nissan stanbic Urvan bus while carrying the poles involved in a gory accident.

Both cars were from the Upper East Region to the North East Region (Kpasenkpe) and the Northern Region (Tamale) respectively.

The KIA Rhyno which was from Bolgatanga in the Upper East Region to Kpasenkpe in the North East Region somersaulted leading to the death of the five persons on the spot and five also in critical condition, while the Nissan Stanbic Urvan bus which was from Bawku going to Tamale was shoved into the gutter with 13 passengers including the driver by the KIA Rhyno driver.

All the 13 passengers on board the Nissan Stanbic Urvan bus survived without being injured.

The driver of the Nissan Urvan bus, Salifu Rauf in an interview Dokurugu Alhassan confirmed that the driver of the KIA Rhyno (dead) was driving at top speed trying to overtake him but knocked his vehicle into the gutter after he lost control between Kareminga and Wulugu on the Bolga-Tamale highway.

“He was just following me with speed to overtake me.

“So I also saw him coming and gave him the way. So the time he overtook my car, he lost control and knocked my car into the gutter and his car also somersaulted and killed five people was on the spot but no one injured in my car,” driver of the Nissan Urvan bus, Salifu Rauf said.

The five persons who sustained various degrees of injuries and are in critical condition are responding to treatment at the Walewale Government Hospital in the North East Region, while the five confirmed dead bodies have been carried to the Bolgatanga Regional Hospital in the Upper East Region for autopsy and preservation.

Meanwhile, the North East Regional acting Police Public Relations Officer, PRO, Robert Anabik Anmain declined to comment saying that the cause of the accident is still under investigation.

Previous Tipper truck crashes into ‘trotro’ on Aflao road, 14 injured
Next 7 people we must remember in prayers this Easter – Ablakwa releases list