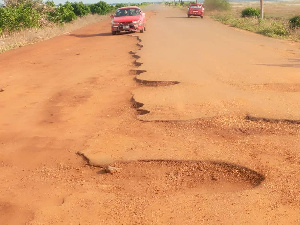 A youth group from Anlo-Afiadenyigba and Havedzi in the Keta Municipality is appealing to the authorities to bring contractors back to fix their deplorable roads.

The Group, known as Concerned Youths of Anlo Afiadenyigba-Havedzi, said the road, full of potholes, had been a death trap to users for years and called on government to prioritise its construction to avoid the needless deaths.

A press release issued on Monday by Mr Gilbert Korbla Keklie, the Convener of the Group, said it took a lot of efforts for the contractor to resume work only for him to disappear.

He said the abandoned project, initiated by the previous government, had claimed lives, including that of a six-year-old, and called on the Government to ensure its completion.

Contrary to the assurance from Mr Godwin Edudzi Effah, the Municipal Chief Executive, in May 2020, that the contractor would finish the culverts and the road works before moving out of site, “the contractor disappeared from the site soon after he partly completed the culverts.”

“Since he left the site, the road had generated more potholes, which are causing more havoc to drivers, motorists as well as other road users. In fact, many accidents are occurring and the people are dying,” the release said.

The release said: “Even though our attention was drawn to the fact that the MP for Keta has filed a question in Parliament with regard to the road, the group would like to have the contractor back within a month.”

“We shall be back with series of press conferences and protests in coming days if our pleadings do not yield any positive results.”