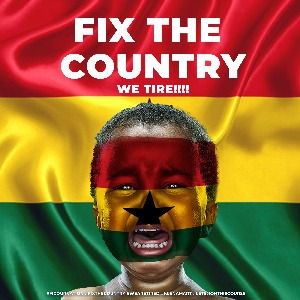 The #Fixthecountry movement is not targeted at the current Akufo-Addo administration, Emily Kanyir Nyuur, Acting Director of OneGhana Movement, has said.

She explained to Abena Tabi on the Key Points on TV3 Saturday, June 12 that it is coincidental that the movement geared towards systemic problems has come at a time that this government is in place.

Since the New Patriotic Party (NPP) administration is the government of the day, she said, it will have to take the ultimate responsibility and address the concerns that have been raised.

“The back and forth with the powers that be with the activities that the governments want to embark on is what has caused a bit of question here and there.

The #FixTheCountry campaign started on social media by some youth who are demanding good governance from the Akufo-Addo-led government.

Notable personalities added their voices to the campaign, expressing concerns about how the country is being governed currently.

Some raised concerns the cost of living in Ghana is becoming too high as a result of mismanagement of the economy.

These concerns were, however, responded to by Vice President Dr Mahamudu Bawumia on Facebook.

“We are four months into our four-year mandate. The job of the government is to fix problems. This is what we have been doing since 2017.

“The COVID-19 pandemic has slowed down the global economy and caused increases in prices of commodities such as oil, cement and iron rods as well as the overall cost of shipping.

“Nevertheless, it is very important to place the performance of our government over the last four years after inheriting an economy with “no meat on the bone” on record. Ours is a government that listens and cares. The facts and data speak for themselves. Trust President Nana Addo Dankwa Akufo-Addo.”

The Chief Executive Officer of The John A. Kufuor Foundation, Professor Baffour Agyeman-Duah has said although the call on the President and government to fix the problems facing the country is appropriate, it is too myopic.

He stated that the social contract the government signed with the people of the country is a two-sided contract, which means the government and the governed all have roles to play.

He said “Indeed, many Ghanaians will say it is the president’s job to fix the country. After all, you elected him and entrusted the state with all the assets and liabilities to his care. We gave the president and his appointees all the comfort they need so they can fix our problems towards attaining a future of peace and prosperity.

“Once such a reaction to the president is appropriate, it is too myopic. It is one-sided in the context of the social contract between the government and the governed or the citizens in democratic governance. As we have in our country this takes two sides to tango.

“The social contract requires that active citizens demand transparency and accountability from the government and this is exactly what President Nana Akufo-Addo said on his inauguration that the governed should be citizens and not spectators.

“Nonetheless, the president is elected to lead and leadership has must meet the requirements and responsibility.”

“I wish to emphasize that the situation we face today wasn’t created today. It is not the creation of President Akufo-Addo and his government. It began long ago and has encompassed all the leaderships and governments of this country.

“This uninspiring situation will continue until radical measures are taken to address the fundamental challenge of our dependent economy.

“Adding to and complicating the challenges of the economy is the Ghanaian attitude or behaviour that increasingly appear to be devoid of any treasured values,” he said while speaking at a Media General public forum on whose duty it is to fix the country, on Thursday, June 10.