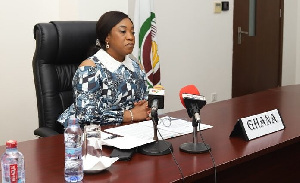 The Ministry of Foreign Affairs and Regional Integration has intervened in the seeming tension between the Inspector-General of Police and the UK High Commissioner to Ghana.

In a statement issued hours after Dr George Akuffo Dampare’s response to Madam Harriet Thompson’s tweet, the Ministry said it has contacted both factions to resolve the issue.

“In line with the general diplomatic practice of communicating with diplomatic missions, preferably through direct engagement, the Ministry wishes to remain circumspect on its pronouncement on the matter.

“We have therefore initiated contact with both the British High Commissioner and Inspector-General of Police to resolve the issue at stake,” the Ministry’s statement issued on Wednesday, June 1, 2022 read in part.

Considering the relationship which has long existed between Ghana and Britain, the Ministry took the opportunity to reaffirm its commitment to the bond of friendship and cooperation between both countries.