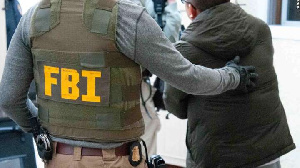 In the first extradition from the Republic of Cameroon to the United States, a Texas man was extradited to Houston on Friday to serve an 80-year prison sentence he received in absentia four years ago after he pleaded guilty in two separate cases to conspiracy, health care fraud, money laundering, and tax offenses.

According to court documents, in November 2016, Ebong Aloysius Tilong, 57, of Sugar Land, Texas, and his wife, Marie Neba, went to trial on the conspiracy, health care fraud, and money laundering charges.

The trial evidence and court documents showed that between 2006 and 2015, Tilong, Neba, and their co-conspirators used Tilong and Neba’s company, Fiango Home Healthcare Inc. (Fiango), to corruptly obtain more than $13 million by submitting false and fraudulent claims to Medicare for home health care services that Fiango’s patients did not need or receive.

The trial evidence and court documents also showed that Tilong and Neba paid illegal kickbacks to patient recruiters to refer patients to Fiango, and that Tilong falsified and directed others to falsify medical records to make it appear as though Fiango’s patients met the Medicare qualifications for home health care.

In June 2017, Tilong pleaded guilty in a separate case to two counts of filing fraudulent tax returns. In connection with this guilty plea, Tilong admitted that he created a shell company called Quality Therapy Services (QTS) to limit the amount of tax that he paid to the IRS on the proceeds that he and his co-conspirators stole from Medicare.

According to Tilong’s plea agreement, in 2013 and 2014, Tilong wrote almost $1 million in checks from Fiango to QTS for physical-therapy services that QTS never provided to Fiango’s patients and deducted as business expenses. Tilong admitted that his tax fraud scheme caused the IRS a tax loss of approximately $344,452.

On Dec. 8, 2017, the U.S. District Court sentenced Tilong in absentia to 80 years in prison for his role in the Medicare and tax fraud schemes.

Source: justice.gov
Related Topics:‘Fugitive’cameroonSENTENCEUS
Up Next