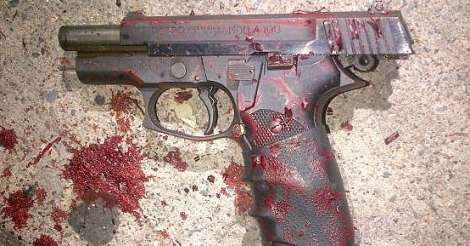 Armed Fulani men have shot dead a 40-year-old cattle owner, Bello Osman at Fakawa, near Ejura in the Ashanti Region.

According to the Police, after receiving a distress call on 14/02/22 at 2000 hours, to the effect that, there was on going robbery at Fakawa near Ejura, they proceeded to the scene and met victims Abram Abubakar aged 40, and Iddriss Jorro aged 30 both Herdsmen.

They reported to Police that Bello Osman was on his Honda motorbike with registration No. GR 8784- 2020 of which they were pillion riders riding towards Fakawa and that on reaching a section of the road were attacked by some Fulani armed men numbering about ten (10).

The attackers tied their victims’ hands up with a rope and robbed them of Ghc2000 and Tecno phone and cash the sum of Ghc300 and itel keypad phone.

The robbers are said to have tied Bello Osman now deceased with a nylon sponge and took them to a spot under a tree near the roadside where deceased started running away from the robbers but was shot and killed.

The robbers then cut loose the rope and asked them to go away. The victims further led Police to a spot in the bush where the body of Bello Osman aged 40 was found lying in a pool of blood on his left side with the face to the ground with multiple gunshot wounds on the body with both hands tied with a blue nylon sponge.

Photographs were taken of the body and the scene after which body was removed and deposited at Ejura Government Hospital mortuary pending an autopsy.

The police say intelligence gathered indicated that about a month ago deceased at Amantin was attacked by some unknown assailants at his kraal at night to steal the herds and butchered his sibling. That he managed to also butcher one of his assailants to death. The deceased later received death threat from an unknown caller and highly suspect his killing was to be a payback.

“Meantime, reliable informants had been contacted to volunteer vital information about the perpetrators for their possible arrest,” a Police statement said.