Home / AFRICA / Tanzanian man invests US$3,000 to build his own grave 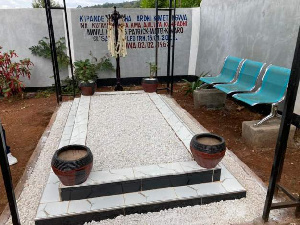 Tanzanian man invests US$3,000 to build his own grave

A 59-year-old Tanzanian policeman has built his grave in his compound in the country’s Kilimanjaro region.

Paul Kimaro’s decision goes against the norms and customs of his ethnic group but he cites reasons such as cushioning his family after he dies and his personal experience burying his parents.

“Being a first-born child, I had a difficult time burying my parents when they died six months apart… so I decided I’ll not take my children through the same [experience],” he told BBC Swahili.

According to the BBC Africa LIVE page, he invested about US$3,000 in the structure that has among others the grave which is tiled with pebbles, a roof and a sitting area for three persons.

The BBC Africa report adds, Mr. Kimaro plans to set aside some money for his casket and believes his family will be able to raise money for other related expenses after his death.

He is also planning to take insurance for his grave in the event of natural calamities like flooding that may destroy it, it added.

The inscriptions on the wall are written in Swahili, the dominant language of the East African nation and has only the date of birth awaiting – as expected.