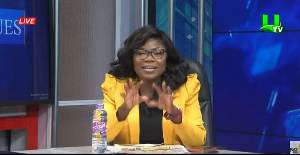 • She maintains that the Finance Minister is to be prayed for, as well as the nation

Broadcast Journalist and head of programmes at Despite Media Group, Afia Pokuaa, known by all as Vim Lady has bemoaned the calls for contribution for the building of Ghana’s National Cathedral.

The initiative which started as a promise President Akufo-Addo made to God to honour Him, has become the ‘burden’ of the citizenry as an appeal is being made to finance the construction of the edifice.

Presenting the Mid-year budget review on the floor of parliament on Thursday, July 29, Finance Minister posited that although the project was on progressing steadily and going according to the programme of the contractor an initiative had been launched to incorporate Ghanaians into the building.

Mr Ofori-Atta indicated that the ”National Cathedral is expected to be officially commissioned on March 6, 2024. Upon completion, the National Cathedral will provide a space for formal religious activities of state and symbolize the enormous contribution of faith to nation-building.”

“The aim of the club is to raise one million Ghanaians who would give GHC100 a month for the construction of the national cathedral.”

“A special shortcode 979 has been developed for this purpose as we look forward to Mr speaker and all the members of this august house join in the GHc100/a month,” the finance minister added.

But reacting to his submission, Afia Pokuaaintimated that it would serve far better interests of the Ghanaian populace if such contributions were directed at fixing and building facilities that are lacking across the country.

She expressed shock at the pronouncements by the minister and proffered that the latter required prayers.

“…he needs Jesus, the whole nation needs Jesus,” the outspoken broadcaster wrote on her Facebook wall.