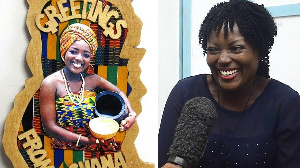 Ghana Month: The beautiful woman whose face has made Ghana popular for 20 years [VIDEO]

Everyone has seen this at one point or the other since the 90’s. It’s a simple but very creative and captivating portrait of a then-18-year-old lady, beautifully clothed in one of Ghana’s rich and unique Kente fabrics.

Carefully clad with beads and a well-styled scarf to match with her charming smile to complement; she posed with a gourd, which content (palm wine) Nana Akua Oduro carefully poured out into a calabash clasped in her second hand.

This was it, a simple concept produced by Joe Osae. Little did he know at the time, how big it would become, in fact, it was rejected many times, till it gradually began gaining popularity.

“Mr. Acquah would tell me, ‘anfa’ – (it didn’t work), and I had to do it like 5 times, do you know how much it took to do colour separation? Then one day I was sitting down and he called me and said now people are patronizing the art…

“People come from Ivory Coast and all, sometimes the airport, and say, I’ve seen your Akwaaba there,” he told TV3.

20 years later, what has come to be known as the “Akwaaba” portrait, has travelled many years and through many countries and borders, to sell Ghana as a country whose people are warming, welcoming and hospitable.

Nana Akua Oduro is now seen in the homes of people, at hotels, offices, airports and many more, though she has grown over the years and is now 39 years.

She is proud and exceptionally happy about how much good her ‘little’ artwork has done for the country decades on.

“Within a few weeks it went viral and it was just like magic, around that time there was nothing like social media, so it just went viral on its own. It’s wonderful,” she told the TV3 news crew.

Her wish today is simple; she needs recognition for the work she has done.

“I want to make an appeal to meet the president and the minister of tourism because it is my face, it’s my picture that is being used but I am not being recognized,” she lamented.