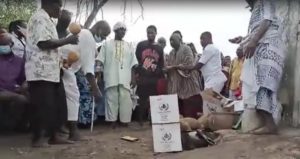 Fetish priests, priestesses, and the entire chiefs of the Gomoa Akyempim Traditional Council have performed rituals to appease the gods of Apam.

The ritual comes after a group of teenagers drowned at the sea at Apam on Sunday, March 7.

For the traditional rulers, the customary rites have to be carried out since the incident is unprecedented and the gods must be pacified.

After consultation from the gods, Queen mother of Apam, Nana Essel Botchwey III, revealed that the gods have demanded a fat cow, three sheep, 12 fowls, 33 tubers of yam and three cartons of schnapps among others.

This, according to her, must be presented to Nananom before the remaining bodies, which have still not been found, will be discovered.

In an interview with Adom News, she indicated that the gods were very angry because the children were swimming at where the gods bath.

“Nananom made it clear they were angry so it was a must for us to come here today to do this ritual. And we are happy that everything went well because the first fowl we sacrificed was accepted by our gods.

“We are also cleansing all cursed and bad omen that looming at Apam and the family of the teenagers we lost,” she told Adom News’ Kofi Adjei.

He noted that the story of the youngsters, who drowned, should serve as a lesson to others in the area.

The Oshihene of Gomoa Akyempim Traditional Council, Nana Okofo Ohene Ampofo, said he was yet to recover from the shock of the incident.

He said the traditional council, as part of its way to protect children in the area from meeting the same fate, will put a ban on children from swimming.

Previous LIVESTREAMED: Bagbin’s first interview after becoming Speaker of Parliament
Next Ghana Month: The beautiful woman whose face has made Ghana popular for 20 years [VIDEO]