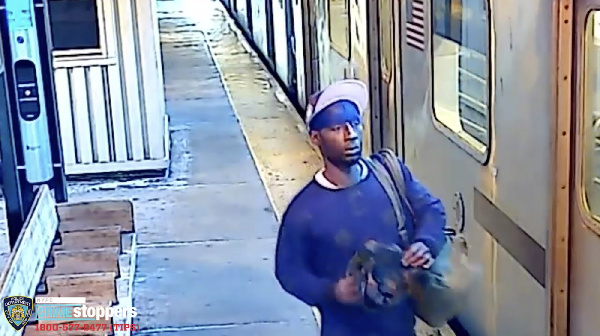 A 37-year-old man of Ghanaian origin has been arrested by the New York police for allegedly smearing human excreta on the face of a woman in a Bronx subway station attack.

Holding a black plastic bag said to have contained human faeces, Frank Abrokwah on February 21, 2022, at about 5 p.m. was captured on CCTV walking up to the woman who was sitting alone on a bench on the southbound platform of the Wakefield–241st Street station.

Abrokwah walked up to the woman and smashed the content in his 43-year-old victim’s face.

He is seen in the footage again smearing the content on the back of the victim’s head.

He was arrested by police on February 28, 2022, and has been charged with forcible touching, menacing, disorderly conduct and harassment.

Abrokwa who is said to have been arrested more than 20 times since 1999,
Was put before the Bronx Criminal Court late Tuesday.

According to Assistant District Attorney Grace Phillips, the suspect before the attack, hit on the victim, asking her, ‘Hey, mami, hey, mami, why don’t you talk to me?’

The police say Abrokwa whose advances was refused by the woman walked into a subway car and defecated into a black bag.

He later came out to smear the faeces on the face of the victim as captured by the CCTV.

He was granted bail by the court but was immediately arrested by Brooklyn detectives who took him into custody as a suspect in a hate crime.