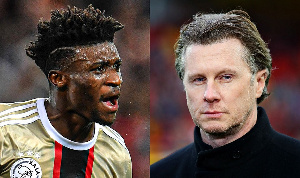 Ghanaians on social media have attacked former Liverpool player, Steve McManaman after he described Mohammed Kudus’ goal against the Reds as ‘nothing special’.

The Black Stars attacking midfielder silenced Anfield with an absolute screamer for Ajax to equalize Mohammed Salah’s goal for Liverpool.

The goal got the plaudits of many football fans who were astonished by the talent of the Ghanaian chap.

Reacting to Kudus’ goal, Steve McManaman who was a co-commentator for the match described the goal as nothing special.

In a sharp rebuttal to silence Steve McManaman, some Ghanaians described the former England player as being bitter about Kudus scoring a goal against his former side.

Anthony Baffoe, a former Ghanaian player who also hit back at the ex-player asked “Who cares about McManaman ??!!!”

While some think McManaman wasn’t special during his prime others also described him as being jealous of the Ghanaian player because he never scored a brilliant goal like Kudus’ goal.

Read some of the comments below