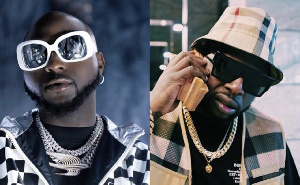 David Adeleke who is known popularly as Davido has responded to South Africa’s DJ Maphorisa over an ongoing debate about who started Amapiano.

The argument started on Twitter on Wednesday, September 14 when a Twitter user said that Davido started Amapiano in Africa.

In his reply, the South African producer and DJ responded to the fan that the first Amapiano song that had Nigerian artists on was titled “Sponono,” and it had Wizkid and Burna Boy on the hit song in 2019.

In his response, Davido slammed the DJ for not liking him.

He further went on to mock the DJ with the success of his song with his South African counterpart, Focalistic, who has two monster Amapiano hits with Davido.

Previous Ghanaians, football fans descend on Liverpool legend for ‘controversial take’ on Kudus’ goal
Next If This Video Comes Out, Mahama Is Doomed