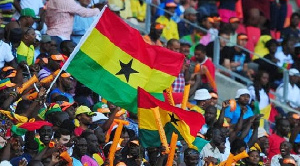 Ghanaians have heaped praises on the Black Stars of Ghana for their emphatic victory over Madagascar AFCON 2023 Qualifiers at the Cape Coast Stadium.

The Black Stars defeated their opponents by 3-0 to record their first win in 2022 under coach Otto Addo.

After a barren first half, midfielder Mohammed Kudus broke the deadlock in the 52nd minute to put Ghana ahead in the game.

AS Roma attacker, Felix Afena Gyan also scored his debut goal for the Black Stars in the game in the 57th minute.

Substitute Osman Bukari sealed it off with the 3rd goal in the game in the 85th minute.

The victory leaves the Black Stars top of their group in the AFCON 2023 Qualifiers.

After the game, Ghanaian fans who were at the stadium expressed joy over the Black Stars convincing win at the Cape Coast stadium.