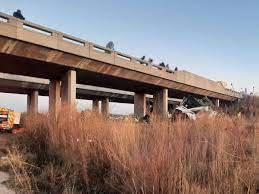 Two pupils were killed and eight others seriously injured after a minibus they were travelling in veered off a bridge before plunging down an embankment in the North West on Wednesday morning.

The two children, aged six and seven, died on impact.

The provincial education department said the minibus, belonging to a private operator, had 26 pupils onboard.

It was crossing a bridge over the Bloemhof Dam while travelling from Hoopstad in the Free State to Bloemhof Primary School in the North West.

Department spokesperson Elias Malindi said the rest of the pupils were sent for observation at Bloemhof Hospital and later discharged.

“It is further reported that these two towns of Hoopstad and Bloemhof are 40km apart and are separated by a bridge crossing the Bloemhof Dam. The local communities from time to time use the bridge to visit relatives,” added Malindi.

She conveyed her condolences to the bereaved families.

“As a department, we are extremely devastated by the accident which took two of our learners. I wish to convey our heartfelt condolences to the bereaved families,” said Matsemela.

“I wish a speedy recovery to those who are still in hospital. This is a third accident within a space of a week.”

Trauma debriefing and counselling were immediately administered to teachers and pupils, the department said.

It added its wellness team would continue with counselling on Thursday.

Matsemela is also expected to visit Bloemhof Primary and the accident scene on Thursday.