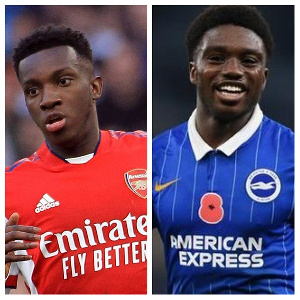 Eddie Nketiah’s incredible form in the final round of the 2021/2022 Premier League season was not enough to earn him a place in the England squad for the upcoming international break.

Nketiah has hit his best form for Arsenal, scoring five goals since February when he replaced ailing Alexandre Lacazette in the Arsenal starting team.

Nketiah would have hoped that his performance in the past couple of months would impress England coach Gareth Southgate but the striker was not named in the latest England squad.

Instead, it is Nketiah’s Arsenal teammates Aaron Ramsdale, Ben White and Bukayo Saka who have been named in the Three Lions team for the UEFA Nations League fixtures, starting against Hungary on Saturday, June 4, at the Puskas Arena in Budapest.

The omission of Nketiah in the England squad is a further boost for the Black Stars who are looking to add him to the team.

Nketiah, as per reports has already secured Ghanaian sports and could soon announce his switch to Ghana.

Despite being born and growing up in the England, Nketiah is eligible to play for Ghana as his parents are Ghanaians.

Another omission that will excite Ghanaians is that of Brighton and Hove Albion right back Tariq Lamptey.

Lamptey is believed to have already given the Ghana Football Association his word and will be named in the squad to face Madagascar and Central African Republic next month.

Unfortunately for Tariq, his season was eclipsed by injuries. He made 30 appearances, starting 14 as a substitute. In the end, he played 1,556 minutes.

He had 5-goal involvements, 2 goals, and 3 assists, an improvement on his 2 goals involvement last season.

Previous He is my uncle – Agyemang Badu reveals relationship with Asiedu Nketia
Next Patapaa divorces his German wife, Liha Miller