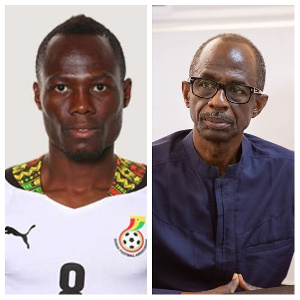 He is my uncle – Agyemang Badu reveals relationship with Asiedu Nketia

Former Black Stars midfielder, Emmanuel Agyemang Badu has lifted the lid on his relationship with the General Secretary of the National Democratic Congress, Johnson Asiedu Nketia.

Agyemang Badu in an interview with Dan Kwak Yeboah TV said he does not only come from the same hometown as Asiedu Nketia but they also are connected by blood.

He described him as an uncle from his paternal side and said he has a great relationship with the veteran politician.

“I come from Seikwa in the Bono Region. The most famous thing I can say is that the General Secretary of the NDC is my uncle. He is uncle and we come from the same place. We are related from my father’s side.”.

He added that Asiedu Nketia prefers not to make their relationship public due to the excesses of politics in the country.

He said Asiedu Nketia wants to protect the family from attacks hence his decision for them to keep their relationship away from the public.

He is however fond of his uncle and stay in touch with him and his family. He disclosed that Asiedu Nketia prefers to discuss family matters with him and not politics.

“A lot of people know actually. He doesn’t like to talk about it because of the nature of jobs we both do. You know politics is sometimes dirty so he does not want drag us into it. He always tells to focus on our jobs and visit when necessary but we talk a lot on phone.

“He is a bit different when we meet. He doesn’t talk politics at all. We only talk about family issues. He calls me Koo Emma and we normally speak in traditional language. I’m cool with his children too,” he said.