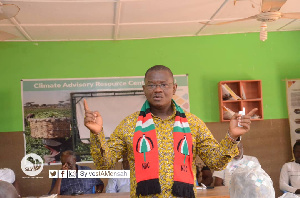 Has the law lost commonsense in the Assin North case? – Sylvester Mensah

Leading member of the opposition New Patriotic Party, Sylvester Mensah has averred that the Supreme Court needs to consider holding public for a to explain some of their judgments to members of the general public.

His views are in relation to the case involving Assin North Member of Parliament, James Gyakye Quayson, who was on April 13 injuncted by a 5 – 2 decision of the Justice Dotse-led court from holding himself out as a lawmaker.

According to the politician popularly referred to as Sly Mensah, the apex court should consider publicly explaining their rulings because the two other arms of government – Executive and Legislature – are already doing so.

It read: “Perhaps the time has come for the Supreme Court to hold public fora, just like the Executive and the Legislature, to explain the wisdom in some of its judgements that have attracted significant public interest and social commentary in recent times.”

In July 2021, a High Court in Cape Coast nullified the election of the Assin North MP, after it found that he owed allegiance to Canada at the time of filing his nomination forms to contest the polls.

Michael Ankomah Nimfah, a resident of the constituency, filed the petition in court and later initiated another action at the Supreme Court to enforce the High Court’s decision.

He urged the Court to prevent a further breach of the constitution by restraining the MP.

On Wednesday, April 13, the Supreme Court in a 5-2 decision ruled on the issue by barring the Assin North MP from performing any Parliamentary duty.

Tags Assin CASE commonsense has IN law LOST NORTH THE