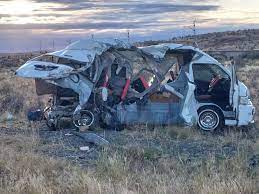 Eleven people have died after a bus and minibus collided on the N1 near Leeu Gamka in the Western Cape on Good Friday.

In addition to the fatalities, an unknown number of people were also injured, he said.

“It is alleged that the minibus was travelling from [the] Western Cape to [the] Eastern Cape and suffered a tyre failure, where the minibus pulled to the side. The bus, travelling from Beaufort West towards Cape Town, drove into the minibus. Recovery and rescue operations are still underway to look for possible further deceased persons underneath the bus,” said Zwane.

The RTMC had sent a team to the Western Cape to assist with investigations, Zwane added.

“We encourage all those who will be traveling this weekend to practise good driver behaviour, comply with the rules of the road, stay within the legal speed limits and observe adequate rest periods during travel in order to avoid fatigue,” he said.

The provincial traffic department had a number of interventions planned to promote road safety.

Premier Alan Winde added: “It is important that we take every measure to promote safety on our roads over this period. Doing so will ensure that we reduce pressure on our healthcare system and save lives.

“It will make this long weekend all the more enjoyable, encouraging visitors to return to our beautiful province once again.”

Previous Has the law lost commonsense in the Assin North case? – Sylvester Mensah
Next Kwahu Easter festivities: the euphoria is back again