Home / ENTERTAINMENT / He was not ready, he had his focus on Ghana – Akon on his failed signing of Sarkodie 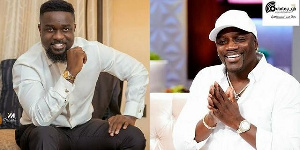 He was not ready, he had his focus on Ghana – Akon on his failed signing of Sarkodie

Senegalese-American singer and songwriter, Aliaune Damala Badara Akon Thiam, commonly known as Akon, has finally revealed why he never signed Ghana’s Sarkodie when he was still in his formative years and bursting with so much potentials years ago.

It emerged that Sarkodie had become the first African artiste recruited on Akon’s Konvict Music but it turned out to be a fallacy later on.

Speaking about this for the first time officially while speaking to Ghana’s Kaly Jay in an interview conducted on Twitter, Akon said Sarkodie lacked the mental fortitude at the time to take the world stage by storm.

In his words, “We had plans to make him so much bigger but I think at the time his agenda was more focusing on Ghana, which worked for him. And I think that it was a plan that worked.

“I mean, it’s arguably or arguably not – but I know for sure if had he followed our plan, he would have been a global artist without a doubt.

“We realized that we really couldn’t work with him yet because he just wasn’t mentally ready to go on that level. We just allowed him to continue moving the way he was moving.