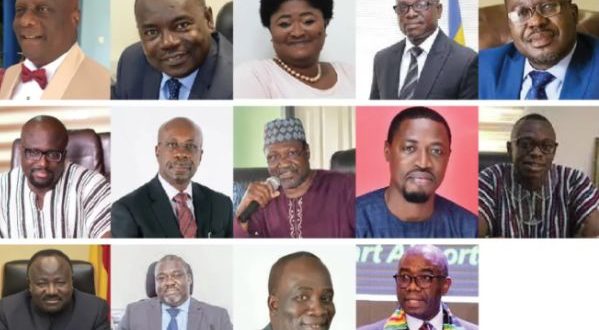 He is, however, not the first head of a state institution to have lost his job since 2017 when this administration took over the reins of power.

President Nana Addo Dankwa Akufo-Addo has the mandate to appoint heads of almost all state institutions. Article 195(1) of the 1992 Constitution empowers him to appoint such heads upon the advice of the governing boards or councils of the institutions concerned in consultation with the Pubic Services Commission.

It is in this regard that President Akufo-Addo has since his administration in 2017 appointed officers to head various public institutions. Some of these heads were also removed with varied reasons given while others did not have reasons for their dismissal

In 2018, Dr Felix Anyah, the Chief Executive Officer (CEO) of the Korle-Bu Teaching Hospital, was sacked from office after his appointment on June 1, 2017, exactly one year of his tenure.

He took over from Dr Samuel Asiamah who was the acting CEO of the hospital. No reason was given for his dismissal. There were, however, allegations that he was the brain behind the investigations of the two Deputy Chiefs of Staff at the Office of the President, Francis Asenso-Boakye and Samuel Abu Jinapor, by the Criminal Investigations Department.

The two were alleged to have interfered in the Unibank contract with the Korle-Bu Teaching Hospital which had anomalies and Dr Anyah’s administration wanted to terminate.

In that same year, Samuel Boakye Appiah who was serving as the interim CEO of the Electricity Company of Ghana had his contract terminated.

The letter dated November 1, 2019, stated that Mr Appiah’s contract ended in 2018. He was therefore directed to hand over to his deputy, Kwame Agyemang-Budu.

The CEO of the Ghana Export Promotion Authority (GEPA), Gifty Klenam, was appointed into office in 2017 but was sacked in June 2018.

She was sacked along with her two deputies and replaced by Afua Asabea Asare.

No reason was given for her dismissal but it was alleged that she spent $132,000 on rent and ₵93,000 clothing allowance of six senior officials of the institution.

During the same period, in June 2018, the dismissal of Paul Asare Ansah, the  Director-General of the Ghana Ports and Harbour Authority (GPHA) made waves after series of allegations were levelled against him by the workers union.

The reason for his dismissal is still unknown. He was replaced by Michael Achagwe Luguje, who was then the Secretary-General, Port Management Association for West and Central Africa, based in Nigeria.

Alfred Obeng Boateng was the Managing Director of the Bulk Oil Storage and Transport Company (BOST) until he was sacked by President Akufo-Addo in June 2018.

The letter, dated June 5, 2018, was signed by the President’s secretary, Nana Asante Bediatuo.

No reason was given for his dismissal but his administration was plagued with series of scandals including the contaminated fuel saga in 2017.

On September 3, 2019, in a letter signed by the Minister of Youth and Sports, Isaac Asiamah, the acting CEO of the National Youth Employment Authority (NYA), Emmanuel Sin-Nyet Asigri and his two acting deputies, Richard Ebbah Obeng and Bright Acheampong, were relieved of their posts and their contracts terminated.

They were directed to hand over to Emmanuel Anaman Mensah who was then the Director of Technical Projects at the Authority. There was no reason given for the dismissal but Bright Acheampong in an interview later alleged that he was sacked because he served as a whistleblower in the institution’s procurement deal that did not follow due process and resulted in a scandal.

John Dekyem Attafuah was appointed the Managing Director of the Ghana Airport Company Limited in 2017 after the resignation of Charles Asare.

His dismissal letter, dated January 16, 2019, was signed by the aviation minister. He handed over to his deputy managing director, Yaw Kwakwa.

It is still unclear why he was removed from office. His dismissal however followed accusations of management lapses and sabotage of government’s initiatives.

In that letter signed by the secretary to the president, Nana Asante Bediatuo, no reason was given for the revocation of his appointment.

There were, however, a number of issues including the trading of accusations between the CEO and the Northern Regional Minister over the 400 missing tricycles belonging to the NDA.

The CEO of the Public Procurement Authority, Adjenim Boateng Adjei’s appointment was terminated on October 30, 2020, following the “Contracts for Sale” investigative piece by Manasseh Azure Awuni.

The termination of appointment was contained in a statement signed by the director of communications at the presidency, Eugene Arhin.

The Commission on Human Rights and Administrative Justice (CHRAJ) recommended his dismissal after his company was involved in winning and selling government contracts.

Francis Boateng was the third person to manage the Tema Oil Refinery (TOR) in Nana Addo’s first administration just after 14 months of serving. His removal from office followed agitations from workers about his mismanagement of statutory payments among others.

His deputy, Herbert Ato Morrison, was also sacked alongside after three decades of service.

The latest to have been added to this list is the Managing Director of the Ghana Airport Company Limited (GACL), Yaw Kwakwa.

He took over from the former Director at a time when he was serving as a Deputy Managing Director until his confirmation.

His appointment was terminated on January 31, 2022, in a letter signed by the Transport Minister, Kwaku Asiamah. The letter was leaked on social media before he heard about it. Many people have linked his dismissal to the recent brouhaha between the airport company and McDan Aviation.