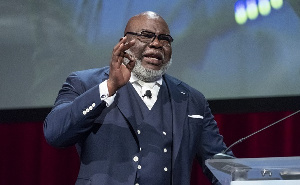 Bishop Thomas Dexter (TD) Jakes, has been in the news lately after he praised President Nana Addo Dankwa Akufo-Addo for what he described as transformational leadership.

According to the Bishop of Potter’s House, a non-denominational American megachurch, when he first travelled to Ghana less than a decade ago, “there were a lot of dirt roads and people just in meagre gear…and very few buildings and nice hotels.”

But “seven years later, I came back and there were interstates, highways, hotels, five-star accommodations, restaurants everywhere.”

“There’s nothing like great leadership”, the televangelist observed while noting that President Nana Addo Dankwa Akufo-Addo has turned Ghana into one of Africa’s “wealthiest” countries.

Bishop Jakes made these comments while introducing the Ghanaian leader to his audience as one of the speakers for his upcoming summit on leadership.

The American preacher noted: “I have, for some time, watched with amazement, the president of the Republic of Ghana and the Commander-In-Chief of the Ghana Armed Forces, His Excellency Nana Akufo-Addo, will speak at our International Leadership Summit this month.

“It is the largest producer of gold on the continent and the world’s second-largest producer of cocoa”, Jakes explained, adding: “Under President Akufo-Addo’s leadership, Ghana has emerged as a booming tech centre – even welcoming Twitter. [Twitter] is moving to Ghana. Africa’s corporate headquarters of Twitter is going to be there”, he mentioned.

Aside from that, T.D. Jakes said: “President Akufo-Addo is also working to transform Ghana into key travel destinations, particularly for Americans but particularly, for African-Americans and the African diaspora and aggressively promoting investment in the country.”

Over the last couple of years, he told the audience, “Ghana’s government has set aside 500 acres of land for foreigners looking to resettle there”.

“Let me explain to all of you African-Americans – Ghana’s move to embrace African-Americans has particular significance because some of the largest ports of slavery [were] from Ghana and, so, the return home and some of the amenities that he’s extending [are] a step toward healing and restoration,” Jakes explained.

He continued: “Imagine the prodigal son coming back home and the father running to meet him and welcoming him back home. It has tremendous significance and he’s done some amazing things in that regard.

He stressed, “The man is brilliant; he’s just smart.”

In his view, President Akufo-Addo has totally transformed Ghana.

“I was watching him being interviewed in Paris and the guy was, of course, speaking to him in French and President Akufo-Addo speaks English quite fluently, several different languages fluently and when he started speaking French to the man and the president turned and started speaking back to him in French; it speaks to his global ability,” Bishop TD Jakes added before sharing a 60-second clip with his audience.