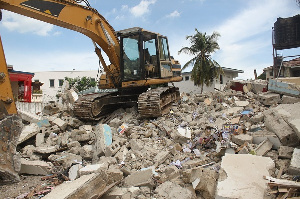 Hearts of Oak is set to begin construction of a new club secretariat after demolishing the none building on Monday, May 23, 2022.

The Ghana Premier League side in a Twitter post announced that their old secretariat has been pulled down to pave way for the erection of a new head office.

“Demolition of the old office to make way for the construction of the new Phobia House,” the tweeted with the images of the demolition exercise.

The Executive board chairman, Togbe Afede XIV, has already cut sod for the construction of a new edifice.

Hearts of Oak on May 11, 2022, outdoor a new commercial center, which will also serve as the club’s secretariat for the temporary.

Speaking at the launch, Togbe stated that putting up infrastructure will help the club achieve their objectives.

“We identified the need to build up infrastructure, to help us achieve our objectives. It is also one of the minimum requirements to enter the African super League, Our academy is very important, our own stadium is very important.”

According to board member, Vincent Odotei Sowah, the Phobians have a quadruple project plan which includes the construction of a new head office.

“One of the quadruple projects is the Hearts of Oak commercial center which we’re commissioning today. The second one is the sod cutting of the new head office of the club which will be done after this short ceremony,” he said at the ceremony.

“The third project of the quadruple project will be the commissioning of the twenty-acre sports facility at Pobiman,” he added.

The former Member of Parliament of La Dadekotopon revealed that among the projects is the construction of a 15,000 seated capacity stadium.

“The quadruple project will be concluded with the building of our own 15,000 seater stadium, somewhere in Accra. Today marks the beginning of the quadruple infrastructure project of Hearts of Oak” he concluded.

Demolition of the old office to make way for the construction of the new Phobia House.