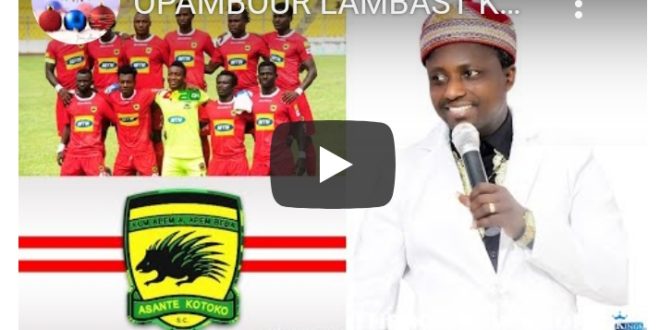 The rivalry between Accra Hearts of Oak and Asante Kotoko is considered as one of the biggest in Africa because its permeates all the sectors in Ghana.

From market women to musicians, corporate people, farmers and all the different sectors in Ghana, the support for Accra Hearts of Oak and Asante Kotoko reigns supreme.

We have written about politicians and musicians who supports either Hearts of Oak or Asante Kotoko in our previous articles but today we turn our attention to the church.

In this episode of the GhanaWeb Features, Joel Eshun looks’ at six popular Ghanaian pastors and the teams they support.

The man who was once described by Asante Kotoko legend, Stephen Oduro as an extraordinary footballer during their colts football days is said to be a stanch fan of the Porcupine Warriors.

“I was born at Akwatia Line, the same house as Bishop Daniel Obinim who is a man of God today. He was our next-door neighbour and was really a good footballer,” Stephen Oduro told myfabulousonline.com in 2020.

The Founder of International Gods Way Church reportedly supported the cub publicly especially during the playing days of his childhood friend Stephen Oduro.

In 2021, he dedicated his TV program to address the internal conflict in the team when it was reported that CEO Nana Yaw Amponsah is not in talking terms with Board Chairman Dr. Kwame Kyei.

He urged them in a harsh tone to settle their differences and focus on the common goal of making Asante Kotoko great again.

The Founder of the Believers of Anointed Palace Chapel, Reverend Obofour is one of the known spiritual fathers of Asante Kotoko.

Unlike most of pastors in this write up, Reverend Oboufour mostly goes to the Baba Yara Sports Stadium to watch Asante Kotoko games especially when they are playing in the CAF Inter-Club competitions.

Ahead of Asante Kotoko’s CAF Confederation Cup against ZESCO United in 2019, Rev Obofour was presented with a customized jersey from their kit suppliers Strike and was asked to rally his support behind the team in their Africa campaign.

To many Accra Hearts of Oak fans, Bishop Charles Agyinasare is their spiritual father and that is why the club went to see him before the commencement of the 2017/2018 Ghana Premier League season which was cancelled due to the Anas Number 12 expose.

Accra Hearts of Oak unusually visit the Perez Dome before any major assignment in the last decade for their Phobian priest to intercede for them spiritually.

Bishop Charles Agyinasare in 2017 when the Phobians visited him at this church led the prayers for the team and supported them to win the Ghana Premier League.

The Founder/President of the Worldwide Miracle Outreach declared his support for the Phobians ahead of the Mantse derby in the 2020/2021 Ghana Premier League.

His congregation backed him up when he was signing the Phobian anthem and the song was shared on all social media platforms by Accra Hearts of Oak fans.

The official handle of Accra Hearts of Oak also shared the video on their social media pages.

The Phobians got a missive endorsement from Pastor Mensah Otabil in 2021 ahead of the Super Clash against Asante Kotoko.

Dr. Mensah Otabil in a viral video sighted by GhanaWeb was seen addressing his congregation as he professed his love for the oldest club in the history of Ghana football, Accra Hearts of Oak.

“I don’t like the English Premier League and it’s because I’m a Ghanaian and I like Accra Hearts of Oak. Until the bones are rotten,” Pastor Mensa Otabil said as his congregation kept cheering him on.

Previous PHOTOS: Beautiful Ghanaian actresses above the age of 40
Next Meet the grandson of IK Acheampong who is an American football star