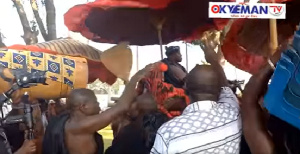 Drama unfolded at State House in Accra during the funeral rites of the late father of the Executive Chairman of the Jospong Group, Dr. Joseph Siaw-Agyepong, as Ga and Ashanti chiefs clashed.

An Ablade TV video sighted by GhanaWeb showed the commotion as the chiefs from the two tribes argued bitterly over the insistence of the Ashanti chiefs, sent by Otumfuo Osei Tutu II, to ride in a palanquin to the grounds of the funeral.

The Ga chiefs, who were representing the Ga Mantse, King Tackie Teiko Tsuru II, said that they would not allow Otumfuo’s representative to ride in the palanquin because it signifies that the Akan chiefs are rulers of the Ga land and ordered that the entrance to the funeral grounds be blocked.

Dr. Joseph Siaw-Agyepong could be seen trying to convince the Ga chiefs, but they remained adamant.

The Akan chief riding the palanquin also refused to walk to the funeral grounds and left the grounds while displacing different dance moves on his palanquin.

One of the Ga Chiefs, the Chief of Onyansana in the Greater Accra Region, Nii Ansah Sasraku I, said that they were not going to allow the Ashanti chiefs to ride the palanquin because it signifies that they are lords over them.

“The Ga Mantse sent us here to represent him, and we came to witness a very worrying incident. We saw an Ashanti chief being carried on the Ga land, and we said we would not allow him to enter the grounds until he steps out of the palanquin and walks.

“That is what we are arguing about here because the Ga land belongs to Gas and we cannot go to their town and be riding on palanquins to a funeral – they will not allow that to happen. So, we’re not moving until he steps out of the palanquin. We hear they are from Kumasi,” he said in Ga.

Also, the Asafoatse for the Ga Traditional Council, Captain Nii Kojo Mankata, who spoke to Ablade TV on the incident, said that it happened as they were leaving the premise of the burial ground to attend to another urgent matter.

“As we were leaving the premise of the funeral, we also saw a chief being carried on the Ga land. We asked them why someone will be riding a palanquin at a funeral and urged the chief sitting on it to step down and speak to us so that we could clarify matters before leaving the State House. But he sent his people to come and tell us that he will not step down. We also decided that we would not allow him to pass through.

“Jospong heard of the incident and came to us. We told him that this was a funeral and none of the chiefs from the other parts of the country came with a palanquin, so why was the Ashanti chief insisting on riding on it? It shows that he has no respect for the Ga Chiefs and the other chiefs that came to the funeral,” he said in Ga.

He added that the Ashanti Chief refused to step down and finally decided to leave the State House in his palanquin.

Watch videos of the incident below: