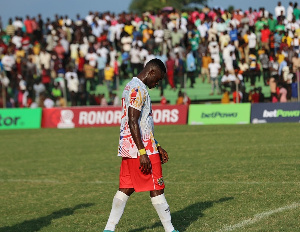 Accra Hearts of Oak legend, Prince Tagoe has stated he is delighted about the club’s defeat to Aduana Stars on the opening day of the Ghan Premier League.

Hearts suffered a 1-0 way defeat loss to the Ogya lads on Sunday, September 12, 2022, thanks to Bright Adjei’s goal 46th-minute goal.

Prince Tagoe believes that the defeat serves as a wake-up call for Hearts to make amends in the subsequent games.

“I’m happy Hearts of Oak lost to Aduana. I believe it will wake them up in subsequent games” he told Angel TV.

Hearts of Oak will take on Great Olympics on match day 2 of the Ghana Premier League.