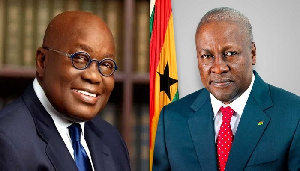 The 2020 presidential race will go down in Ghana’s history as one of the most highly contested among flagbearers of the two major parties, NPP and NDC, in the country.

This is because it was the first time the two opposing candidates of the parties had each been president at a point thus making the contest largely centred on a comparison of records.

John Dramani Mahama who stood on the ticket of the NDC, however, lost incumbent President Akufo-Addo who obtained 51.6% of the vote, compared to the former’s 47.4% of total votes cast.

He, thus, filed a petition at the Supreme Court challenging the outcome of the 2020 presidential election results.

The petition was grounded on the claim that both candidates of the political rival parties, Nana Akufo-Addo and John Mahama, did not meet the 50 plus 1 threshold as espoused in Article 63(3) to be declared President-elect per the declaration of the EC chairperson on December 9, 2020.

Amongst six reliefs sought by the petitioner (John Mahama) including a re-run of the election, Mahama was asking the court through his petition, “an order of injunction restraining the second Respondent (Nana Addo Dankwa Akufo-Addo) from holding himself out as President-elect”.

If the relief was granted, it would have technically barred President Nana Addo Dankwa Akufo-Addo from being sworn in.

After nearly three months of court proceedings, the Supreme Court in a unanimous verdict dismissed the petition by John Mahama as lacking merit.

“The petitioner did not demonstrate in any way how the errors [committed by the EC] affected the declaration of the election…We have therefore no reason to order a re-run [of the polls]. We accordingly dismiss the petition,” Chief Justice, Kwasi Anin-Yeboah said while reading the ruling of the court on Thursday, March 4, 2021.