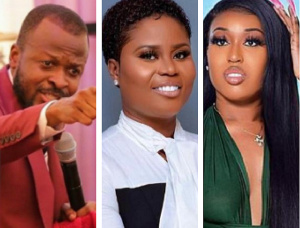 A video in which Prophet Daniel Amoateng was spotted, spiritually declaring Fantana’s mother’s parliamentary seat untouchable at a church gathering, has resurfaced online.

In what looked like a setting of a church crusade, the Power of Life International General Overseer, was seen performing some spiritual directions to ‘grab’ the Jomoro MP’s seat, which he said was keenly contested in the realm of the spirit.

This comes after the court declared victory for Mrs. Dorcas Affo-Toffey after a long 2-year battle in court, over her parliament seat.

Shortly after being elected as the Member of Parliament (MP) for Jomoro constituency, Mrs. Affo-Toffey was part of a number of NDC MPs whose parliamentary seats were challenged in court for various reasons.

In the case of Fantana’s mother, her eligibility as an MP was challenged by one Joshua Emuah Kofie, who claimed she had multiple nationalities, including American and Ivorian citizenships, an act, which breaches the 1992 constitution.

But after a long legal fight, the Sekondi High Court dismissed the petition, thereby, pronouncing the Jomoro MP constitutionally elected.

Basking in the victory steeze, prophet Daniel Amoateng shared the video where he was seen engaging in some heated prophetic sessions with Mrs. Dorcas Toffey, as she sat among the crowd during his crusade.

“Honourable be on your feet. This is honourable for Jomoro. Take off your phone from the seat. Come forward, go back and sit on the chair. (Repeats the process three times). Anybody looking for your seat, I have crashed them. Any decision against your seat, let this alter destroy it,’” he was heard saying.

Previous Women get dry during sex when stressed, angry or upset – Actress
Next Why Databank is trending number 1 on Twitter