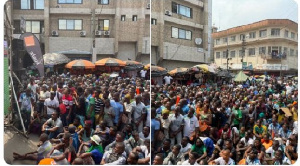 The Leone Stars of Sierra Leone made a good come back to the Africa Cup of Nations after 24 years with a goalless draw against the defending champions, Desert Foxes of Algeria.

The performance of the Leone Stars against the defending champions have won them admiration from journalist and many football fans across the African continent.

Though Sierra Leone put up an impressive performance to halt the winning run of Algeria, the Leone Stars are trending on social media because of the overwhelming support they got back at home during the game.

Thousands of people in Freetown trooped the streets to watch the game on a giant screen to mark their return to the Africa Cup of Nations after twenty-four years just like the way Ghanaians were doing it for the Black Stars some years ago.

Sierra Leoneans watched the game from the street and their homes proudly as the Leone Stars gave the AFCON defending champions a tough battle to mark their return to the tournament after close to three decades.

The scenes from Freetown is reminiscent of the glory days of the Black Stars where Ghanaians used to camp on the streets to watch the players in action.

Watch the scenes from Freetown as Sierra Leoneans followed their first Afcon game in 24 years in the post below: