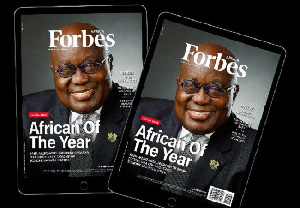 African of the Year Award means the world is seeing the work of my government, Says President Akufo-Addo

Former Chief Executive Officer of the Ghana Free Zones Board, Kwadwo Twum Boafo, has downplayed the significance of the African of the Year Award recently handed to President Nana Addo Dankwa Akufo-Addo by Forbes Magazine.

Whereas Forbes touted President Akufo-Addo as having repositioned Ghana in the global marketplace as one reliant on its resources and strengths, some Ghanaian personalities have disagreed with the international media brand owing to the prevailing economic conditions in the country.

Speaking on Metro TV’s Good Morning Ghana show monitored by GhanaWeb, Kwadwo Twum Boafo, who is a member of the opposition NDC, maintained that despite some renowned personalities receiving the Forbes award in the past, the likes of alleged Nigerian fraudster Ramon Abass (Hushpuppi) winning same makes the nobility of the award questionable.

Mr Twum Boafo then retorted, “exactly! Hushpuppi has been named as the entrepreneur of the year by the same magazine.”

His point was in reaction to the Member of Parliament for Kwadaso, Dr Kingsley Nyarko, who was on the show and sought to commend President Akufo-Addo for winning the award.

Hushpuppi is a Nigerian social media influencer facing criminal charges in the United States for fraud and other scams.

He is said to have defrauded a US law firm of about $40 million, illegally transferred $14.7 million from a foreign financial institution, and targeted to steal $124 million from an English football club until his arrest by the Dubai Police in June 2020 and his extradition to the United States.

Love for a fair lady ends Yatimi in prison