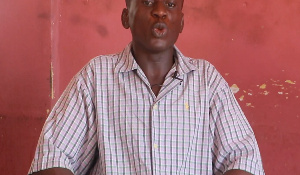 A 23-year-old prison inmate, Stephen Yatimi ended up in prison after he stole a motorbike to sell to enable him to cater for his girlfriend.

Though it is said that it takes efforts to retain someone you love, Yatimi is an example of those who would risk anything so as not to lose their girlfriends without considering the repercussions.

In an interview with Crime Check TV GH, the young man said his undying love for his lover, known as Monica compelled him to consider engaging in acts regardless of the risk involved.

The young man said he met the lady when he came to Kumso Mankraso in the Ashanti Region of Ghana to do illegal mining after he left the Northern Region in search of greener pastures. He said in all his endeavors he prioritized the lady’s interest before his in order not to lose her.

“I met her at the ‘galamsey’ site where we both worked. When the job collapsed, it was difficult for me to rent a room so she gave me Five Hundred Ghana cedis to add to an amount of One Thousand Ghana cedis to enable us to start a new life. I loved her so much that I did not want to lose her,” he said.

He added, “I wanted to set up a business for her and make her comfortable before I think about myself.”

Narrating how he ended up in prison, he said he was duped off the One thousand five hundred Ghana cedis and after efforts to get a new job failed, he feared he was going to lose Monica so he approached his siblings for help.

“My brothers could not help but advised me to steal a motorbike to sell since I was a mechanic when I was in the North.” Unfortunately for him, he said the bike he attempted stealing belonged to a police officer and he could not get away with it.

“I intended buying a cheap mobile phone and then sell it at a higher price but I was duped. I did not know what I was going to tell my girlfriend. I was out of my senses and I was ready to do anything to get money. When I took the motor and attempted to move it, I was apprehended and mobbed,” he indicated.

The inmate said when he was arrested, he came back to his senses but it was too late for him. However, God did not disappoint him when he decided to trust in Him for help.

“God took me out of the difficulties in prison and even sent me a helper who gave me her contact and asked me to call her when I leave prison,” he said.

Crime Check Foundation (CCF), with support from a US-based donor, ‘The Only One’ paid his fine of One Thousand Two Hundred Ghana cedis for his release.