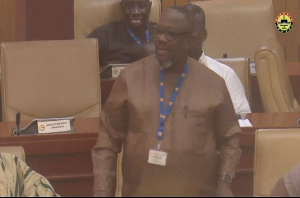 The Member of Parliament (MP) for Komenda-Edina-Eguafo-Abirem, Samuel Atta-Mills, has lamented the current economic hardship in the country.

According to him, the economy is so hard that he is unable to afford a blade to shave his beard.

His comment was after they failed to identify him when he got up to contribute to the review of the Order Paper with the Minister for Works and Housing, Francis Asenso-Boakye.

Speaker Bagbin had asked, “the honourable member wearing the face mask, is that your beard?”

To which Mr. Atta-Mills jokingly replied, “I don’t have money to buy a blade to shave my beard,” myjoyonline.com reports.

The Speaker then responded, saying “okay, I understand your age.”