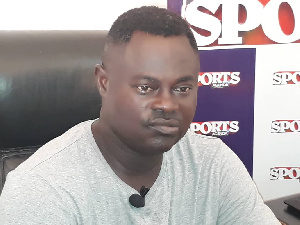 I feel disrespected by leadership of GFA – Nii Odartey Lamptey

Former Black Stars player, Nii Odartey Lamptey has said he felt ‘disrespected’ by successive leaders of the Ghana Football Association (GFA) for their failure to acknowledge his role in taking the sport to a next level.

The one-time FIFA U-17 World Cup winner believes he has been continuously unrecognized, snubbed and deprived of playing active roles in shaping the game in the country.

According to Odartey Lamptey, he deserves to be honoured with some positions in the junior national teams in the country.

Speaking to Saddick Adams, popularly called Sports Obama on the ‘Angel TV’s Sports Live’, Odartey Lamptey, said that most players whose contribution to the history of the country’s football cannot be overlooked have been vastly neglected, including himself.

He admitted that the situation was unfair and painful citing the example of Europeans who learn from celebrating their legends by giving them roles and also including them in decision making.

“With the National teams, I used to say it is about time and I believe as I speak now, I should be given one of the junior national teams to coach. It really pains me, but I will say God’s time is always the best.

“Recently, I heard of the upcoming WAFU Zone B U-17 championship to be hosted in Cape Coast, and if nothing at all, I should have been given that respect by giving me an invitation as an ambassador…. But I didn’t know, I only read it on the internet.

“Because if you take someone like me [Odartey Lamptey] who has been there and seen it all and not part of any of the U-15, 17, and 20 till now… then it’s worrying,” Nii Odartey Lamptey said.

The ex-Anderlecht attacker emphasized that “well, this is the part of the country we live in but it’s really sad. if you recall the just ended UEFA Champions League, former AC Milan and Netherland legend Clarence Seedorf was [made] an ambassador taking the trophy on tour across the World” he stressed.

The Glow Lamp Soccer Academy Founder, therefore, expressed disappointment over Ghana’s failure to excel in youth football something he said makes him feel worried due to the exclusion of most of them in that level of the junior national teams.

Asked if he will go back to an active coaching job, the former Elmina coach indicated that “My doors are open so if any opportunity comes my way, then I will compare it to my soccer academy and then decide.”

Tags BY disrespect FEEL GFA I

Previous Wizkid, Tiwa Savage spotted together for the first time in years
Next Head of Nigeria’s Methodist Church freed by kidnappers