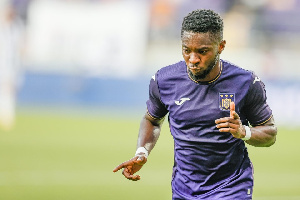 RSC Anderlecht forward, Francis Amuzu has stressed that he has a massive love for Ghana and will never disrespect the country, the football association, or its amazing football fans.

The player has made the comment after reports that he has opted to play for the Belgium national team instead of his home country.

Some reports even suggested that the player has said he sees himself being more Belgian than Ghanaian.

To set the records straight, Francis Amuzu has taken to his social media page to emphasise his love for Ghana.

According to him, the speculations about him with regards to the Black Stars are all false.

“I would like to make an official statement regarding false comments that have been circulating the media today regarding the Black Stars.

“I have massive respect for my country of birth and I love my country Ghana. I will never disrespect the country, GFA, or the amazing fans,” Francis Amuzu posted on his Twitter page.