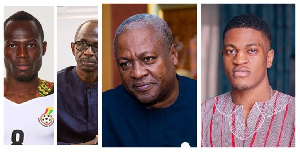 Politics and football are like siblings because they both need each other to survive, especially in our part of the world where politicians use the success of national football teams to score political power.

Ghanaians like any other Africans are well aware of how politicians use football, particularly the Black Stars to make them look good in the eyes of the public.

Though politicians are open about their interest in the game, you can not say the same about footballers as they try as much as possible to stay clear off the political discourse.

Even footballers who are related to some politicians in Ghana often distance themselves from them in public and what they do.

Here is a compilation of four Ghanaian footballers who are related to some of the big political figures in Ghana.

Some of these players have even featured for the Black Stars in the past.

The late striker who won the heart of Ghanaians with his performance for the Black Stars in the 2008 Africa Cup of Nations in Ghana was reportedly related to the first President of the 4th Republic.

Junior Agogo according to reports was the nephew of the late former President Jerry John Rawlings.

It was reported that Agogo’s mother and Rawlings were from the same family thus making the footballer the nephew of the former Head of State through the matrilineal lineage.

Unlike the other names you will see in this listicle, Sharaf Mahama is related to former President and current opposition leader, John Dramani Mahama by blood.

The 24-year-old former Rostocker FC striker is the son of John Dramani Mahama.

Sharaf is yet to feature for any of the Ghana national teams since making his senior debut for Belgium club Tempo Overijse in 2017.

Emmanuel Agyemang-Badu revealed his relationship with the General Secretary of the opposition National Democratic Congress, Johnson Asiedu Nketiah in a recent interview with Dan Kweku Yeboah TV on Youtube.

The former Black Stars midfielder revealed that Asiedu Nketiah is his uncle and is related to him from his father’s side.

He stated that Asiedu Nketia prefers not to make their relationship public due to the excesses of politics in the country.

“I come from Seikwa in the Bono Region. The most famous thing I can say is that the General Secretary of the NDC is my uncle. He is my uncle and we come from the same place. We are related from my father’s side.”.

Former National Organizer of the opposition National Democratic Congress, Yaw Boateng Gyan, and Black Stars forward, Kevin-Prince Boateng are the next on our list.

Similar to that of Agyemang-Badu and Asiedu Nketia, Yaw Boateng Gyan and Kevin-Prince Boateng are related from the paternal side.

Yaw Boateng Gyan used his position as the uncle of the player and a member of the football ruling class in Ghana for Kevin-Prince Boateng to make peace with the Black Stars technical handlers and return to the team ahead of the 2014 FIFA World Cup in Brazil.