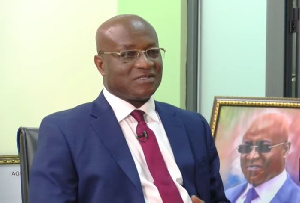 Major Leader and Member of Parliament for Suame, Osei Kyei-Mensah-Bonsu, has alleged that the members of the opposition National Democratic Congress (NDC) were behind an attack on him by some persons in his constituency.

Kyei-Mensah-Bonsu suggested that an NDC group in his constituency, who were not willing to listen to him, during a visit started hooting at and pelting him with sachet water.

“There is an NDC group behind the post office area and I believe that the third group that came, we met and they said they were not prepared to listen to any government official and that the NPP has disappointed them and so on. I think that group was led by our opponent.

“There is an NPP group by the road side … When the people (NDC group) got there, they overturned the elephant carving and started stamping on it and that is where they started shouting ‘NPP away, Nana Addo away’

“I am saying I suspect them,” Kyei-Mensah-Bonsu, who is also the Minister for Parliamentary Affairs, said.

He added that despite his suspicions he thinks that the concerns raised by the residents were legitimate and will be dealt with.

Some artisans at the Suame Magazine in the Suame Municipality of the Ashanti Region on Monday, July 18, 2022, hooted and pelted their Member of Parliament with sachet water over the bad state of roads in the Constituency.

The MP was there to inspect the abandoned Suame highway, which the artisans said had claimed a life due to its deteriorated nature.

Some angry artisans, upon hearing of the arrival of the MP, thronged the highway and started hooting, pelting him with sachets of water.

They also blocked some roads in videos sighted by GhanaWeb.

According to the MCE, the MP managed to make it to a meeting point where he met with leaders of the workers’ groups and explained to them what was being done to address their concerns.