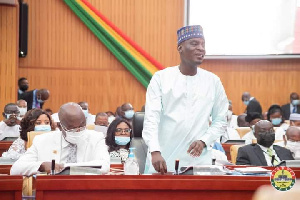 Minority Leader, Haruna Iddrissu has charged the Minister of Interior not to take the conflict in Bawku lightly due to the deteriorating situation.

According to him, he was frightened by what he saw in the area during his last visit to the region, hence the need for security agencies to take necessary steps to curb the brewing tension.

Speaking on the floor of parliament when the Interior Minister, Ambrose Dery, appeared before the house to answer some urgent questions, the Minority Leader had this to say:

“…Let’s not take the matter in Bawku lightly, on two occasions I was asked that I can’t enter here or go there. That is the extent of the heat manifesting in excessive arms in wrong hands and citizens are just sitting across, not relating to each other as they use to. Driving back, I have been frightened by the deteriorating situation in Bawku must receive the necessary and urgent attention from the Minister of Interior and probably for National Security.”

Reacting to the comments, the Minister indicated that aside from the presence of the military and police, the peace council is engaging residents in Bawku to reduce the tension in the area.

The Ministry of the Interior in November 2021 imposed a dusk to dawn curfew on the Bawku Municipality and its environs in the Upper East Region following renewed chieftaincy disputes in the area.

According to the Minister, the imposition of the curfew had been a result of threat of insecurity in the area.

It had also placed a total ban on all persons in the afore-mentioned communities and their environs from carrying arms, ammunition or any offensive weapons.

Before the implementation of the curfew, REGSEC had banned the wearing of smock in the area with immediate effect, explaining that “This was necessitated by the fact that criminals or unscrupulous elements hide arms and ammunitions in smock and attack opponents or innocent civilians”.