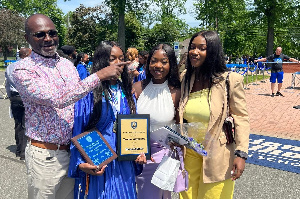 The Member of Parliament for Assin Central, Hon. Kennedy Agyapong has said that he will not allow his daughter marry a delivery guy who works at United Parcels Service (UPS).

According to the legislator, he will not pay school fees of $84,000 only for her daughter to end up with a UPS guy.

The maverick politician recounted how a nice gentleman who is the son of a friend attended a thanksgiving party he threw for one of his daughters.

He said a nice gentleman came to the party and immediately caught his daughters’ attention. According to him, they asked who the gentleman was and what he does. They were told the said gentleman works at UPS a delivery company. He continued that all of a sudden, the admiration for the gentleman doused.

The firebrand politician backed his daughters saying that he won’t pay school fees of $84,000 for her daughter only for her to end up with a UPS delivery guy.

Previous Why did VAR rule out Benzema’s goal in the Champions League final vs Liverpool?
Next PHOTOS: Powerful and popular Ghanaians who are freemasons