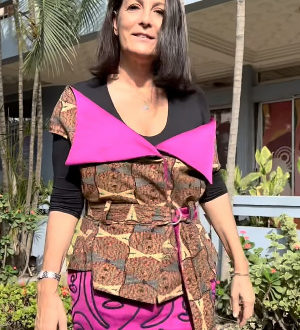 After celebrated French Ambassador to Ghana, Anne Sophie Avé announced that her 4-year stay in the country will come to an end in August 2022, she has disclosed that she wouldn’t mind staying in Ghana should she find the man of her dreams.

Explaining why she wouldn’t mind settling down with a Ghanaian man, Anne added that Ghanaians have not been anything but so sweet to her since her arrival into the country, hence, won’t think twice about marrying a Ghanaian.

“Ghanaians have been so sweet and nice to me. If I ever fall in love with any of them, I won’t hesitate to get married to either of them,” she disclosed.

The 54-year-old French native became an ambassador to Ghana in September 2018.

During her time here in Ghana as an ambassador, she has met and experienced the Ghanaian culture to the fullest.

In April last year, she was enstooled as Nkosuo Hemaa of Hani in the Bono Region. Now known as Nana Benneh III, the ambassador pledged to support the development of her community.

Source: www.ghanaweb.com
A Anne AVE dreams GHANAIAN HE hesitate I IF IS man MARRY MY OF Sophie THE to wouldn't 2022-05-25
Elvis Anokye
Share

Previous Truck rams into eatery; traps, kills woman at Afienya
Next ECOWAS Chair challenges Africa to fight for its independence